If you want to book a room in college for an event or function, please use the college’s Room Booking Form. 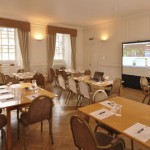 The Leslie Stephen Room (LSR) is named after Trinity Hall alumnus and father of author Virginia Woolf, Sir Leslie Stephen. Located above the college kitchen, this room is often used for MCR functions such as the McMenemy Seminars. It is well suited for lectures and can be booked by members of the college.

The Leslie Stephen room is best reached by a staircase located directly across the hallway from the dining hall. A plaque on the wall will guide you in and up. 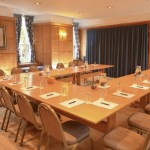 From the Junior Bursar’s office:
the “Bridgetower Room” is named after the classical violinist George Augustus Polgreen Bridgetower.  This child prodigy made his debut in April 1789 in Paris to rave reviews at the age of only 9 or 10.  In 1791 at the age of 11, the Prince of Wales placed him under his protection and he became the first violinist in the Prince’s private orchestra.  During 1802 he made friends with Ludwig von Beethoven, who described Bridgetower as “an absolute master of his instrument”.  Beethoven composed his Kreutzer Sonata for the young Afro-European musician and personally performed the sonata for violin and piano with Bridgetower.  Elected to the Royal Society of Musicians in 1807, Bridgetower then attended Trinity Hall in 1811 where he earned the degree of Bachelor of Music.

The Lecture Theatre, also known as the Old JCR, is an excellent venue for meetings of larger societies. 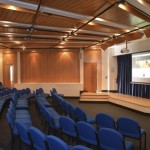 Various small teaching rooms (seating between 3 and 10 people) with tables and whiteboards are can be booked via the Supervision Room Booking System.